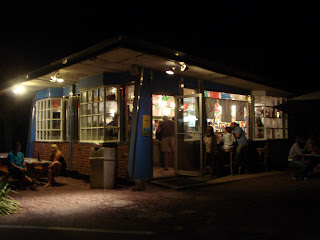 I know this isn’t New York City but there’s a small taco scene out in the The Hamptons that’s legit. After deciding not to wait forever at the Sunset Saloon in Montauk, I drove over to “La Fondita.” Perusing through the menu I quickly noticed I was now dealing with the real thing, which surprised me that a place like this would be in the middle of Amagansett. Are these East Coast Güeros finally wising up to the ways of the West?

I sampled every taco on the menu even after getting weird looks by the skinny bitches (hey I’m thin too). I’ll start off with the tongue tacos because I love this taco the most, it’s simple yet in my opinion it’s the hardest taco to get right. The meat needs to be tender and some shred the beef so it doesn’t harden. La Fondita’s tongue taco was okay, I wasn’t blown away. In fact the tortilla on all the beef tacos I ordered were a bit on the dry side, which distracted from the meat. The tacos were okay, a place like this would be run of the mill in Los Angeles and for a lot LESS.

The taco to get here is the Tacos de Camarones, Shrimp tacos. La Fondita hit t 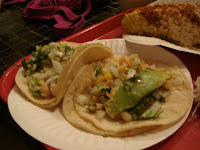 he ball out of the park with this one. The taco is filled with several shrimps; the corn, cilantro, onions, and red pepper add a lot to this taco.

The corn (elote) here is amazing, I think because it's locally grown and the corn in Long Island tends to be good. Make sure to wash the the shrimp taco and the elote down with some expensive horchata ($3.75 ouch). I’m going back this weekend to sample their Pozole, stay tuned.
Posted by NS at 8:34 AM