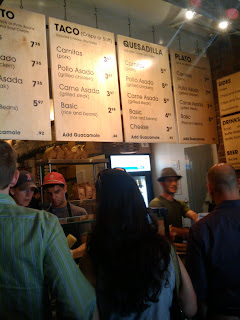 I heard about Dos Toros through a co-worker, and I thought “great another hipster taqueria that I am going to dislike,” I was wrong, I wanted to hate this place, but I couldn’t. The tacos are pretty damn good, I ordered two (they’re big) tacos, steak and carnitas. Their tacos include cheese, salsa, and sour cream, of course you can order without the extras. I don’t remember ever having cheese in my tacos, but this was a nice touch, and definitely added to the taste.

I felt so bad that I judged a place by it’s appearance so I reached out to Dos Toros and dug a bit deeper, and they were very cool and here’s what they had to say.

What was your favorite taqueria back west (San Francisco area)?

Gordo Taqueria (which everyone calls Gordo's) is the place Oliver and I (and our general manager Tyler) grew up eating like 5 times a week. It's our inspiration, and is the source of our passion and love for this food. But obviously it's not just Gordo's - the bay area just has unreal taquerias. It's the perfect food, and it has been completely solved. We're not trying to improve on it, because it can't be improved on. We just want to do it justice and bring it to a new place.

Were you and your brother Oliver surprised at the quality of the basic tacos when you first came out east?

We were impressed with some of the tacos we ate, and none of the burritos. Which makes sense because there's a pretty good size Mexican population in New York, and they're bound to bring great tacos with them. But nobody eats burritos in Mexico, so plenty of Mexican immigrants don't necessarily equate to good burritos.

Also, our tacos are a lot bigger than the typical Mexican taco. It's the northern California way - they're just more filling, and have more components. I certainly wouldn't claim they were any better, just different. Also, our crispy taco is kind of unique in that it's more "crisp-ish" - which we love. As opposed to a deep fried, totally hard shell.

When did you first open?

With one of my tacos I went crispy at the advice of a friend. What gave you guys the idea of going crispy?

Gordo's did their crispy tacos this way, and we always loved it.

I think it's cool you guys use anti-biotic free chickens and sustainability is also a focus for your business, was this always in the business plan from the get-go?

Sustainability has always been a part of the business plan. Not the heart of the plan, just an important component. Generally the bay area is a little ahead of New York on sustainability, so we kind of brought a bay area sensibility with us for that aspect as well as the food.

Batman. He would get down on a couple of our tacos for sure.