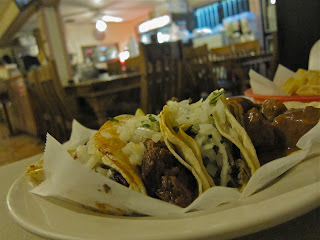 You want to escape the madness that is SXSW for a minute? From the convention center head East on Cesar Chavez for about a mile or so and you’ll find yourself at Taqueria Chapala.   The restaurant is adorned with faded posters of the church and city of Chapala, Jalisco.

Lets get down to it, I sampled a wide variety of tacos, sometimes only taking a bite or two of a taco. My sample:
The only tacos one should order are the seasoned barbacoa Jalisco style taco and the carne guisada.   Two completely different styles but both evenly balanced with the right amount of spices, a nice bouquet of tastiness.  The al pastor taco was underwhelming and generic; and after inhaling the carne guisada taco I had high hopes for the beef tongue taco, but the meat was a bit dry and the salsa and lime juice only helped a little.   The cactus taco deserves a mention because  it doesn’t get a lot of attention and it's an acquired taste.

Taqueria Chapala is opened from 9am till 11pm.

Email ThisBlogThis!Share to TwitterShare to FacebookShare to Pinterest
Labels: Austin

Mexican Seder looks easy and yummy to make man. Thanks for sharing something from the people who are from the different country. Thanks for the recipe